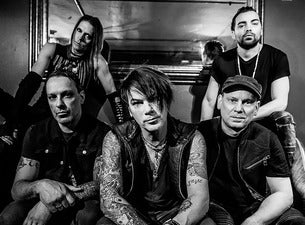 During alternative rock's 1990s heyday, Stabbing Westward was one of the most popular industrial bands next to Nine Inch Nails and Filter. With a mix of pulsating beats, snarling metallic guitars, and ominous synthesizers — all held together by vocalist Christopher Hall's ferocious, anguished vocals — the group put a fresh spin on the genre.

Hall and keyboardist/programmer Walter Flakus originally co-founded Stabbing Westward in the '80s, while serving as DJs at their college radio station at Western Illinois University. (The duo allegedly took the band's name from a snippet of a President Eisenhower speech found on an LP cover.) The pair eventually moved to the industrial music mecca Chicago and self-released a 1992 EP before inking a major label deal with Columbia Records.

The 1994 cult classic Ungod led to tours with Depeche Mode and Killing Joke, and set up Stabbing Westward for future success. Most notably, 1996's gold-certified Wither Blister Burn & Peel spawned two MTV and alternative and mainstream rock radio hits: the creepy electro-rocker "What Do I Have To Do?" and "Shame," the latter a song brimming with searing metallic fury. Two years later, the gold-selling 1998 effort, Darkest Days, launched another Top 20 modern rock radio hit with the keyboard-heavy, aggressive "Save Yourself."

The band split up in 2002, although its principal members stayed busy; most notably, Hall formed and toured with The Dreaming. However, Stabbing Westward booked two reunion shows in 2016, after Flakus and '90s-era guitarist Mark Eliopulos returned to the fold. The concerts were so successful, Stabbing Westward made their return permanent. In fall 2018, the band marked the 20th anniversary of Darkest Days with a U.S. tour where they played the album in full. Despite the time away, Stabbing Westward hasn't lost a step: Their stage presence is moody and full of dramatic lighting, which only amplifies the angst and melodrama built into the music.