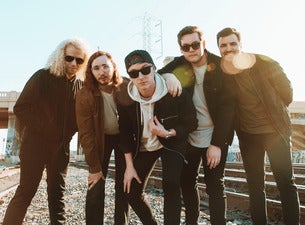 New York pop punkers State Champs have been rocking fans with their emotional songwriting and prize-worthy live performances since forming in 2010. They’ve toured with big names like All Time Low and 5 Seconds of Summer, and it’s easy to see why as they tear through adrenaline-filled anthems like “Remedy” and “Elevated” in concert. In addition to their hard-hitting songs, State Champs also have a softer side, and they’re just as impressive when frontman Derek DiScanio takes things down a notch to deliver tender tracks like “If I’m Lucky”. Whether they’re turning out distorted guitar feedback or waxing acoustic, State Champs always give ticket buyers a first-rate concert experience chock-full of heart-on-sleeve pop punk goodness.

State Champs was formed in Albany, NY in 2010 by singer Derek DiScanio and guitarist Tyler Szalkowski. After assembling the rest of the band they released two EPs in late 2010/early 2011, and in 2012 they signed with California-based pop punk imprint Pure Noise Records. They made their debut on the label that same year with the 7" Overslept, which they recorded with producer Jay Maas (Defeater, Transit). After that release they began work on their full-length debut, which arrived in 2013 as the critically acclaimed effort The Finer Things. The album was a hit, peaking at No. 2 on Billboard's Heatseekers Albums Chart and leading to extensive touring alongside bands like Motion City Soundtrack, Bayside, and The Wonder Years. Following stints on the 2014 Vans Warped Tour and the Pure Noise Records Tour, State Champs returned to the studio to record their second full-length album, a highly anticipated release that their loyal fans can’t wait to experience in concert.