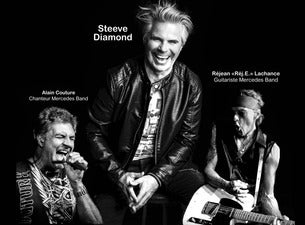 One of Quebec's most energetic and exciting performers for more than 20 years, Steeve Diamond goes far beyond what most audiences would consider imitation or impersonation. Powered by his onstage bravura and astonishing tenor voice, his impressions soar to a whole other level, with Diamond embodying a stunning array of musical icons. In his new show, Diamond Experience, he performs songs by everyone from Queen and KISS to Offenbach and Andrea Bocelli, thus providing a thrilling survey of several decades of rock, pop, and opera.

Infused with the wit that earned the busy Montrealer the nickname "le ténor de l'humour" (the tenor of humor), Diamond's latest production is a performance that only he can deliver. It also marks his first solo headlining tour at home after several years performing across Europe and Quebec with Les 4 sans voix, the astonishingly agile supergroup of vocalists and humorists that teamed Diamond with Switzerland's Yann Lambiel, France's Laurent Chandemerle, and Belgium's Fabian Le Castel.

The group's performances brought another wave of international attention to this native of Saint-Barnabé-Nord. Diamond has been a favorite of Canadian audiences since he made his first appearances at Just for Laughs after his studies at the National School of Humour in Montreal. In 1998, Diamond did his first gala performance at Just for Laughs — that same year, he launched his first solo show, which toured for three years and was nominated in several categories at the ADISQ and Olivier galas. In 2001, Diamond began wowing and delighting audiences as a member of The Three Tenors of Humour, the group he formed with Michaël Rancourt and Louis-Philippe Beaulieu.

Whether sharing stages in his many projects or performing in the Diamond Experience with his friends in Mercedes Band — Alain Couture and RejE Lachance — Diamond draws from a repertoire of impressions that now tops 100 in number. Ozzy Osbourne, David Bowie, Robert Plant, and Joe Cocker are all part of the Diamond Experience. But this rocker is just as passionate about opera, a fact that Diamond made perfectly clear on ‘Sinfonia,' the debut album he released in 2014. No matter the song, style, or show, Diamond makes his passion for music clear in every moment he's onstage.