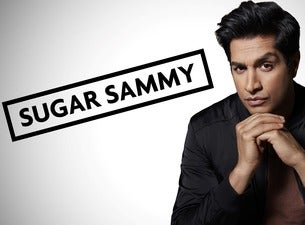 "Sugar Sammy is a rising star in Canadian comedy and around the globe who has made several appearances at the Just For Laughs Festivals in Montreal and Toronto over the years. We feel that he is well on his way to becoming one of comedy's breakout acts and are thrilled at the chance to help bring him to the next level of success." - Bruce Hills, Chief Operating Officer, Just For Laughs

Just For Laughs, the comedy experts, are proud to bring you Sugar Sammy Live In Concert! a Canadian comedy concert tour that will rock your socks off with its hilarity.  Sugar Sammy, one of Canada's fastest rising stars, will hit 8 cities across the country this winter. Tickets go on sale Monday, December 8 at 10:00 am. Please visit hahaha.com for detailed ticket information. The Montreal Gazette tabbed Sammy as "...destined for greatness" and we want to show you why!

As one of the hottest emerging young comedians on the international circuit, Sugar Sammy has recently enjoyed considerable success around the world.  Always on the cutting edge, Sammy delivers explosive laughs with amazing style and flair. He has set attendance records and received rave reviews in comedy clubs, colleges, and theatres across North America, Europe, South Africa, and Asia.

Critics are unanimous in their praise of his hilarious material and sharp delivery.  In the past year, Sugar Sammy has toured in the US, Canada, England, Australia, Germany, Ireland, Holland, Hong Kong, Thailand, Dubai, the Philippines, and in South Africa, where his one-man show sold an incredible 15,000 tickets!

Sugar Sammy stirs up and samples the multi-cultural melting pot that mirrors life in most urban centres today. From commenting on arranged marriages in his Indian ancestry, to his views on deviant sex, drugs, and modern day relationships, Sammy will have audiences laughing, thinking, and seeing life in a whole new way!