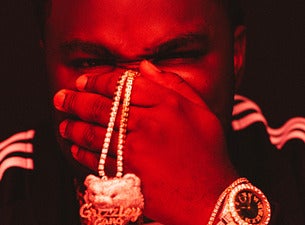 It only takes a couple bars of Tee Grizzley's breakthrough single, 2016's "First Day Out," before the chills start tingling down your spine — and when the resilient Detroit rapper performs the hit live, the energy in the room shifts. Grizzley is a true alchemist when as turns his struggles into powerful songs, so he's the perfect tour mate for artists like Jeezy, whose Cold Summer tour he opened for earlier in 2018; he's also become the go-to surprise guest for superstars like Drake and Trey Songz, both of whom have surprised Detroit audiences with the hometown hero in recent years. He's also linked up with the chart-topping Atlanta trio Migos for a string of arena shows, alongside Memphis rap's rookie of the year, BlocBoy JB; as well as performing alongside charismatic fellow Detroiter Sada Baby.

Tee Grizzley was born in Detroit, Michigan — the city that's inspired his tough, sincere catalog. The rapper born Terry Wallace fell in love with hip-hop in high school, forming a group called All Stars Ball Hard with three friends. Wallace is no stranger to triumphing through adversity, from a series of family tragedies, to a yearlong prison stint that truncated his college career. But that roadblock turned out to be a blessing: during his time in prison, Wallace poured his heart into his raps, writing the entirety of what would be his debut mixtape, ‘My Moment.' The day of his release in October 2016, Wallace proceeded directly to the studio and recorded "First Day Out," still in his jail clothes. The momentous, poignant track became an instant hit, and before the year's end, he'd inked a deal with 300 Entertainment. He's since released his debut album (2018's ‘Activated'), collaborated with stars like Meek Mill and Lil Yachty, and was nominated in 2017 for BET Hip-Hop Awards for both Best Mixtape and Best New Hip-Hop Artist.