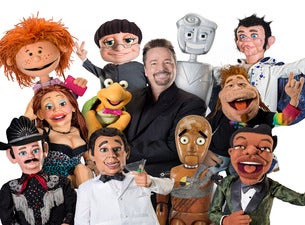 Terry Fator is quite the character -- whether he's impersonating country singers with his dummy Walter T. Airdale or performing soul tunes as Julius the Marvin Gaye-loving puppet, Fator proves he’s a ventriloquist mastermind. His 2007 debut on America's Got Talent left audiences floored by his wide range of impersonations, and he won over judges by incorporating stand-up comedy and classic songs into his wildly entertaining skits. Joined by as many as 16 different puppets for his live performances, Terry Fator and company will have fans rolling on the floor at his 2014 residency at the Mirage in Las Vegas.

Terry Fator got his start in ventriloquism at an early age, purchasing his first Willie Talk dummy in fifth grade and winning a talent show at his local church. His singing experience came later as the frontman of late-'70s band Freedom Jam, whose live shows often included Fator's impersonations of famous artists like Garth Brooks and Etta James. After years of moderate success, Fator finally got his big break on America's Got Talent in 2007, winning the entire show and launching to stardom virtually overnight. Since then, Fator and his puppet friends have enjoyed tremendous success, appearing on a number of talk shows and landing their own act at the Las Vegas Hilton hotel. Not only is he a famed actor and ventriloquist, but he's also an activist for Ronald McDonald House charities and the author of Who's the Dummy Now, an autobiographical account of his path to success. Terry Fator's expansive list of talents will leave fans utterly amazed during his Vegas residency at the Mirage.

"Terry's talent is unbelievable! He never ceases to amaze us!"

"Seeing his show in person was more than I had expected. He gave a wonderful show and I would go see him again."

"This was a great show! He is unbelievably talented as a ventriloquist. His humor is fun. His imitations are so good because he combines them with the use of the dummies. Loved it!!"