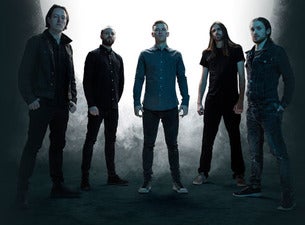 British prog-metal titans Tesseract are pioneers of the djent metal technique characterized by distorted, palm-muted guitar chords, joining bands like Meshuggah and Textures as torchbearers of the niche style. With their syncopated riffs, epic solos, and distinctive djent playing, the band put on one heck of an epic live show, slaying fans around the globe with the bludgeoning force of thunderous tracks like "Nascent" and "Nocturne." Back on the road for their latest tour, fans of face-melting metal can expect total satisfaction as the band shred their way through their catalog.

Started by Acle Kahney in 2003, Tesseract emerged from the burgeoning djent metal scene pioneered by Kahney and other guitarists like Periphy's Misha Mansoor and Monuments' John Browne. After years of establishing the style and building a band around the project, Kahney and Tesseract released the Concealing Fate EP in 2010 before embarking on a headlining tour in support of the release. The EP formed the basis of their 2011 debut One, which made considerable waves among the metal community and earned them the Progressive Music Award for New Blood. Sophomore album Altered States would follow in 2013, earning the band another round of praise and paving the way for continued touring.