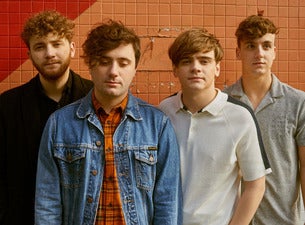 The Academic In Concert

Hailing from the outskirts of Mullingar (an Irish town located an hour west of Dublin), The Academic formed in 2013 while its teenage members were still in school. But within a year, the quartet of Craig Fitzgerald (vocals/guitar), Dean Gavin (drummer), and brothers Matthew (guitar) and Stephen Murtagh (bass) were opening a regional show for alt-rock legends the Pixies.

Before long, The Academic would become one of Ireland's most buzzed-about new bands thanks to their debut single "Different" in 2015. It was an exhilarating whirr of jagged ‘n' jangly guitar lines, gliding rhythms, and yearning vocals that racked up several million listens on Spotify. It also earned the group a slot that year at the British Summer Festival at London's Hyde Park alongside The Strokes, Beck, and Future Islands.

The "Mixtape 2003" single followed in 2016, a nostalgic paean to the post-Strokes style of indie-pop that forms the central strain of the band's musical DNA. But The Academic have shown a willingness to stray outside their skinny-jeaned comfort zone, embarking on their first U.S. tour in 2017 as openers for folk-hop fusionists Judah and the Lion.

For their debut full-length album, Tales From the Backseat, the group signed with Downtown Records, the eclectic alt-pop imprint distributed through Interscope. The album saw the group further refining their sound, with lead single "Bear Claws" nodding to formative influences like Weezer and Arctic Monkeys, but packing an irresistible "Ay! Oh!" chorus hook that fits right into the 2010s pop landscape.

Upon its release in January 2018, Tales From the Backseat went straight to No. 1 on the Irish album charts. That summer, the band played its biggest headlining show to date for 5,000 fans at Dublin's Iveagh Gardens, confirming their status as one of Ireland's premier contemporary rock bands.