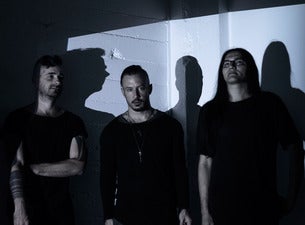 THE BLACK QUEEN IN CONCERT:

The Black Queen has built a strong cult following with a dark strain of electronica that incorporates everything from trap and industrial to R&B and synthpop. The band boasts an impressive pedigree – Greg Puciato (The Dillinger Escape Plan), Joshua Eustis (Nine Inch Nails), and Steven Alexander began working on the project in 2013, and in 2015 they blew fans and critics away with the haunting vocals, skittering rhythms, and genre-defying sound of their debut single "The End Where We Start." At their hypnotic live performances the band is a force field of energy, cranking out industrial beats and buzzing synths amid a hazy cloud of billowing fog and convulsing LED lights. Puciato softens the sonic assault with his melodic vocals, which offer a refreshing juxtaposition to the booming bass and rapid-fire percussion. The band's rare performances are already legendary, and ticket buyers lucky enough to catch them live won't be disappointed.

Dillinger Escape Plan frontman Greg Puciato thrilled fans in 2013 when he announced a new project with former Nine Inch Nails member Joshua Eustis. The pair recruited former Nine Inch Nails tech Steven Alexander, and in 2015 they made their debut as The Black Queen. The band cut their teeth with a string of extremely limited-edition recordings – they only made 33 copies of their tape Fever Daydream Cassette MMXV, and followed up with just 233 copies of the 12" for "The End Where We Start." Despite the scarcity of the recordings and the band's reticence to promote them on social media, The Black Queen managed to build a loyal following on the strength of their mesmerizing live shows. They released their debut album Fever Daydream in 2016, earning glowing reviews and drumming up major excitement for their upcoming shows.