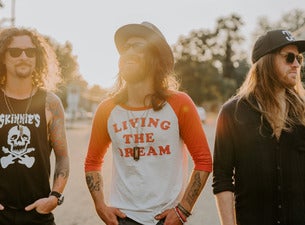 THE CADILLAC THREE IN CONCERT:

The Cadillac Three have quickly made a name for themselves with their unique mixture of rock gusto and country twang. Whether they're on tour with Florida Georgia Line or headlining their own shows, the trio always gets fans clapping along with rollicking renditions of favorites like "The South" and "Party Like You". The Cadillac Three may be new to the country crossover scene, but if their stellar recent performances on the road are any indication they're headed straight for the top.

The Cadillac Three was formed in 2013 by three former members of the group American Bang. The new trio's primary songwriter Jaren Johnston had previously written hits for Tim McGraw and Keith Urban, and he got right to work penning the Cadillac Three’s self-titled debut LP. The album was released in May of 2013, peaking at No. 19 on the US Heatseekers Albums chart and drawing the band out on the road for a series of energetic performances. Several months later they followed up with their official debut single "The South", which featured vocals from Florida Georgia Line and Dierks Bentley and sold more than 165,000 copies. A rising new act with one of the hottest live shows in country music, The Cadillac Three continue to impress ticket buyers on their unforgettable tours.