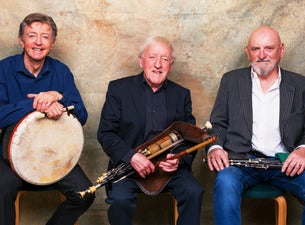 The Chieftains on Tour

The Chieftains bring a long legacy of traditional Irish music along with them every time they take the stage. Leader and multi-instrumentalist Paddy Moloney has been on board since the band began their journey back in 1962, and he continues to stoke the flame of Celtic folk for audiences all over the world. Some of the comparatively "new boys" in the band have been on board since the '70s. Bringing instruments like fiddle, bodhran, pipes, harp, flute and pennywhistle into play, The Chieftains don't go in for any sort of flash or spectacle, but they invest each performance with so much energy, it's clear that passion and fun are top priorities. Chieftains shows feature ripping instrumental tunes, tear-jerking ballads, and sometimes step dancers who come to the front of the stage and get the crowd stirred up with their fancy footwork.

The Chieftains in Concert

The Chieftains are known all over the planet as the absolute rulers of the realm when it comes to Irish folk music. Their story started in 1962 when Paddy Moloney put the group together in Dublin along with Sean Potts and Michael Tubridy. Two years later The Chieftains released their first, self-titled album, and though the band started earning attention in the '60s, it wasn't until the following decade that they really exploded on an international level, partly buoyed by their score for the 1975 Stanley Kubrick–directed movie Barry Lyndon. Ever since then, the band has gone from strength to strength, winning armloads of Grammys and other honors along the way. While members have come and gone over the years, the mission of The Chieftains — to be ambassadors of traditional Irish music — has remained consistent, even when they've collaborated with icons the likes of Van Morrison, Sting and Sinead O'Connor.