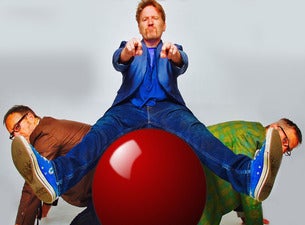 THE DAN BAND IN CONCERT:

The Dan Band has carved a unique niche for itself at the intersection of music and comedy, combining equal parts humor and chops to achieve their pitch-perfect pop culture send-ups. Known for their histrionic, tongue-in-cheek covers of traditionally female-fronted power anthems, comedian Dan Finnerty and his hilarious backup duo have become a comedy circuit favorite and late-night talk show staple. The Dan Band is a live act first and foremost — their 2005 debut album was a live album — and there's no better way to experience them than on their 2014 tour.

The brainchild of actor and comedian Dan Finnerty, the Dan Band got their start in LA's comedy club scene, where they were hailed as the "hottest ticket in town" by Entertainment Weekly. After making several high-profile cameos in comedy blockbusters like The Wedding Planner (2001) and Old School (2003), the band released their 2005 debut album The Dan Band Live. The album was a hit, featuring parodies of pop culture subjects including Shakira ("Whenever Wherever/Hips Don't Lie") and bubblegum pop ("Genie In a Bottle/No Scrubs/Slave 4 U") and setting the tone for their future live shows. As the band hits the road for another gut-busting tour in 2014, no topic is off-limits, and fans wouldn't have it any other way.

"The Dan Band was one of the most entertaining and hilariously funny shows I've ever been to. What a blast! The best in comical acts!!!"

"The Dan Band exceeded expectations. The song performances and song selections were perfect. The group truly seemed to enjoy performing for us! I especially enjoyed when Dan interacted with the crowd, he was funny without being an a**hole."

"That was some funny stuff. The Dan Band was so funny and he can really sing. The performance was outstanding."