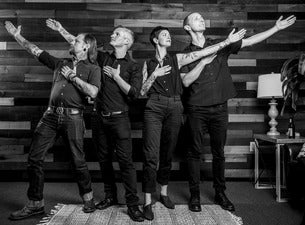 THE DEVIL MAKES THREE IN CONCERT:

At first glance the members of the Devil Makes Three look like they belong in a hard rock group, but once the music starts it’s clear the trio is the embodiment of down-home bluegrass and country-folk. The band’s sound combines witty lyrics, thumping stand-up bass, and clean guitar licks, and it all comes together perfectly at their toe-tapping live performances. With four LPs under their belt including 2013's I'm A Stranger Here, the band has plenty of material to keep the country jams going all night on their must-see tours.

Santa Cruz-based group the Devil Makes Three was formed by friends Pete Bernhard, Lucia Turino, and Cooper McBean in 2002. They released their self-titled debut the same year, earning widespread acclaim from fans and critics alike. Since then the band has released four records to Top 10 spots on the Billboard Bluegrass Albums chart, including 2009's chart-topping Do Wrong Right. The band has spent years on the road traveling throughout the US and Europe, making several festival appearances along the way. Exceptional live performers, the Devil Makes Three always deliver fun-filled shows for fans of country, folk, and just plain amazing musicianship.