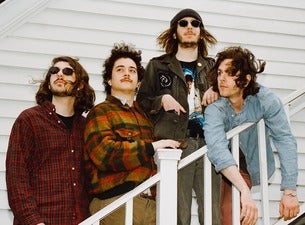 THE DISTRICTS IN CONCERT:

Pennsylvania rockers The Districts are quickly becoming a live favorite among indie folk fans with their rootsy sound and soulful on-stage performances. The talented young quartet delivered a moving set at 2014's SXSW festival, and their subsequent shows on tour in support of White Denim continued to generate buzz. Whether they're treating fans to the harmonica-laden "Funeral Beds" or playing introspective tracks like "Lyla", The Districts always imbue their music with a passion and authenticity that leave fans wanting more.

The Districts formed in Lititz, PA, in the early '00s, penning their first songs and playing shows while still in their teens. They self-released their debut album Telephones in 2012 and quickly made a name for themselves in the Pennsylvania music scene with their heartrending live performances. The band spent 2013 playing shows and writing songs, and in 2014 they released a highly anticipated self-titled EP. The critically acclaimed record earned them comparisons to Dylan and the Lumineers by Rolling Stone, setting the tone for a whirlwind year that included their first SXSW showcase, a stint on tour with White Denim, and an appearance at the Outside Lands Festival in San Francisco. A rising young act with talent to the gills, The Districts continue to build their fanbase on their must-see tours.