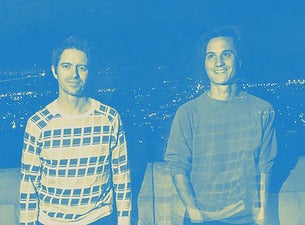 THE DODOS IN CONCERT:

Indie rockers The Dodos bring a polyrhythmic complexity to their epic folk-inspired tunes in concert. Meric Long’s acoustic guitar work gives the songs a vibrant, earthy pulse, creating a wall of sound characterized by fervent strumming and intricate jazz chords. His cohort Logan Kroeber further accentuates these unique songs with his booming, rapid-fire drum work. The two brilliantly crisscross each other’s churning rhythms as Long croons masterful melodies and hopeful lyrics. This two-man tour de force is sure to thrill ticket buyers with their powerful blend of indie, folk, and world music whenever they hit the stage.

Meric Long (guitar/vocals) met Logan Kroeber (percussion) through the latter’s cousin, who frequently attended Long’s solo gigs in San Francisco. The two began playing together in 2005, discovering that Kroeber’s metal chops were well-suited to recreate the complex African-inspired drum patterns present on the singer’s self-recorded 2006 EP Dodo Bird. That same year, the pair released the full-length Beware of the Maniacs before undertaking a lengthy promotional tour. With the release of the critically acclaimed album Visiter in 2007, they made their official debut as The Dodos while their cult following continued to grow. Their 2011 outing No Color also generated buzz based on contributions from guest vocalist Neko Case (formerly of The New Pornographers), who harmonized perfectly with Long on over half of the album’s songs. Building on the strengths of preceding albums, the band released their sixth album Individ in 2015, marking a new epoch for both their complex instrumental prowess and their immediately powerful hooks. Both in concert and in the studio, The Dodos continue to please audiences everywhere with music that feels both densely intricate and immediately enjoyable.