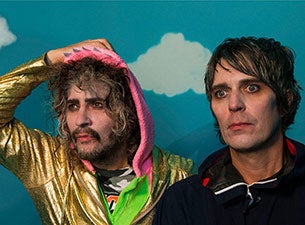 Bringing their neo-psychedelic flavor to a whole new generation of fans, the Flaming Lips released their most recent album, The Terror, in April 2013. Later in the year, they released Peace Sword, an EP of songs inspired by the film Ender's Game. The Flaming Lips have constantly been on tour during the past three years, with an average of two dates per month. It's an impressive schedule, to say the least, especially if you're familiar with how one-of-a-kind the band's live shows are. At any moment, ticket buyers can expect anything from puppets to video animation, confetti-filled balloons and colored smoke shows at a Flaming Lips concert. Frontman Wayne Coyne then steps into a giant plastic bubble and walks on top of the audience – crowdsurfing at its most nuanced. The Terror lends itself well to live interpretation, invoking as it does the dystopian psychology of science fiction novels. Surrealist antics on stage reflect the wonderfully dark tone of the album. Songs like the title track and "Butterfly, How Long it Takes to Die" are hauntingly beautiful, cathartic songs about love and loss, life and death.

Wayne Coyne, his brother, Mark, and their friend, Michael Ivins founded the band in 1983. After several personnel changes, the band finally found a winning formula, and pretty soon, was cranking out albums. Transmissions from the Satellite Heart, released in 1993, hit the charts, received critical acclaim and earned the band a spot at Lollapalooza. The single, "She Don't Use Jelly," inspired a cult following and reached No. 55 on Billboard's Top 100. Coyne and company followed with several more albums, each one offering a new spin, new concept and new set of rules by which the band continued to remain fresh year after year.