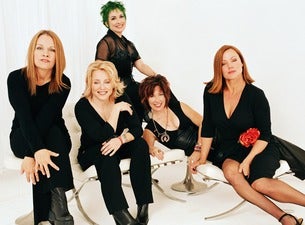 THE GO-GO'S IN CONCERT:

After three decades together, iconic new wave girl group the Go-Go's still have the beat. Boasting an all-star lineup that includes the beloved voices of Belinda Carlisle and Jane Wiedlin, the Go-Go's continue to be one of the most effervescent live acts around, practically bursting with energy as they take the stage to perform upbeat classics like "Our Lips Are Sealed" and "Head Over Heels." One thing is clear: these girls just want to have fun, and that's exactly what they'll do on their upcoming tour dates.

Formed amid LA's burgeoning punk and new wave scene in the late '70s, the Go-Go's got their start playing seminal venues like The Whiskey A Go Go and The Roxy. For their 1981 debut LP Beauty and the Beat, the band eschewed their early punk sound in favor of a more radio-friendly brand of power pop -- with phenomenal results. The album peaked at No. 1 on the Billboard 200, spawning the hit singles "Our Lips Are Sealed" and "We Got the Beat" and earning the girls the Best New Artist award at the 1982 Grammys. 1982 follow-up Vacation was a similar success, landing two more hits on the charts and going on to be certified Gold by the RIAA. Following an initial breakup in 1985, the band's members embarked on various solo ventures, reuniting periodically over the years to record and tour. Back on the road for another highly anticipated tour, the Go-Go's will bring their signature energy to venues around the country.

"Great energy and super show. Go-Go's brought back the 80's for a few hours, and we had a great time."

"The girls all looked and sounded great.  Belinda sang a few of her songs and she was sounding great. Plenty of Go-Go songs and it was a great balance of all the girls' music."

"They were just as fun & energetic as they were in the ' 80s! Very enjoyable!"