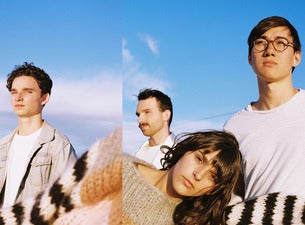 The Greeting Committee in Concert

You have to respect a band that lands in the lineup of one of the highest profile music festivals while having just five published songs to their name — all while its members are still in high school. This is only the beginning of The Greeting Committee's story, which has them jumping from high school talent show stars to Lollapalooza darlings in just under a few years. But when you hear the Kansas City, Missouri quartet's bright, jangly indie pop, you'll understand why — it's easy to be turned on by their charm.

The foursome — vocalist/guitarist Addison Sartino, guitarist Brandon Yangmi, bassist Pierce Turcotte, and drummer Austin Fraser — came together in 2014 as high school students. After playing small gigs around Kansas City and self-releasing their debut EP, ‘It's Not All That Bad,' they caught the attention of local radio host Lazlo Geiger, from 96.5 The Buzz. He helped them secure a manager, a tour, and eventually a record deal with Los Angeles-based label Harvest Records, home to indie favorites like Best Coast, TV on the Radio, and Banks.

The label re-released the band's debut EP in October 2015. With the help of sweet and sunny lead single, "Hands Down," which quickly generated over 10 million streams, The Greeting Committee soon landed a slot at the 2016 South by Southwest Music Festival in Austin, Texas, as well as that year's Lollapalooza. They also scored opening spots on tours with bands like The Mowgli's, Tennis, and MisterWives, and began growing a bigger following thanks to their raw and dynamic performances. Their 2017 sophomore EP, ‘Meeting People Is Easy,' would showcase an even more mature sound, infused with touches of sax.

Fully transitioning from teenagers to adults, the band would set off on a 2018 tour with Jukebox The Ghost before releasing their anticipated full-length debut, ‘This Is It,' in October 2018. This would have them heading back out on the road in 2019, alongside Canadian rockers the Arkells.