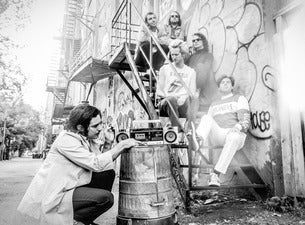 THE GROWLERS IN CONCERT:

SoCal garage and psych rock favorites The Growlers continued to evolve in 2014 with their third album Chinese Fountain, an ambitious record that expanded their laid-back "beach goth" sound with polished arrangements and crisp production. While the album marked a mature new direction for the band, their outrageous live shows remained as satisfyingly madcap as ever, treating ticket buyers to colorful wigs, outré makeup, cross-dressing, and assorted props and antics. Whether the band is conjuring up the retro haze of "One Million Lovers" or basking in the disco strut of "Chinese Fountain" , they always deliver an unforgettable concert experience that combines eccentric theatricality with first-rate musicianship.

The Growlers formed in Southern California in 2006 and quickly made a name for themselves with their trippy, reverb-soaked take on '60s pop. After several early lineup changes the band settled on their core roster of Brookes Nielson (vocals), Matt Taylor (lead guitar), Anthony Braun Perry (bass), Kyle Straka (keyboards, guitar), and Scott Montoya (drums) and released their 2009 debut album Are You In or Are You Out? They followed up in 2010 with the Hot Tropics EP, a critically acclaimed collection chock-full of compact psych-rock jams like "Sea Lion Goth Blues" and "Graveyard's Full". In 2012 the band hosted the first annual Beach Goth Party, a showcase of modern surf rock and neo-psych bands that featured performances by local favorites including Dante Vs Zombies, Tijuana Panthers, and Summer Twins.  They kept the vibes flowing in early 2013 with the release of their sophomore record Hung at Heart, a critically acclaimed collection that Filter magazine described as having a “little something for everybody”. In 2014 The Growlers released their third album Chinese Fountain, a polished release that they backed up with a series of rollicking, psychedelic performances on tour.