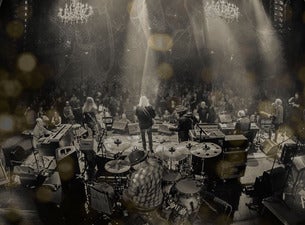 One of the greatest concerts of all time!

The set list featured The Band favourites and draws from the guest’s rich catalogues … Up on Cripple Creek, Forever Young, The Shape I’m In, Caravan, The Night They Drove Old Dixie Down, The Weight, Mannish Boy, Further On Up The Road, Helpless, Coyote, I Shall Be Released … to name but a few

The Band and their guests played until two thirty in the morning, closing proceedings with ‘Don’t Do It’. It was the last time they ever played together. The concert was filmed by Martin Scorsese and has been billed as ‘the greatest concert film of all time’, developing legendary status as a concert, an event and a movie.

Introduced by RocKwiz co host and writer, Brian Nankervis, this is your chance to hear the stories (and the myths) behind the concert and to witness the incredible music, performed live by a star studded Australian cast.

The Rockwiz Team first performed The Last Waltz Revisited at The State Theatre at The Melbourne Arts Centre in December 2015 and received multiple standing ovations and rave reviews from the sold out audience.

“The Rockwiz Team’s presentation of The Last Waltz Revisited was pure joy. A superb recreation of a legendary concert, performed by some of our finest singers. Spontaneous, multiple standing ovations are rare these days, but you couldn't keep this audience seated. Loved it.”