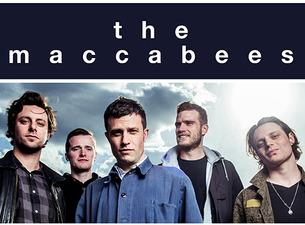 Formed in 2004, five-piece band the Maccabees has quickly  risen from humble beginnings to Mercury Music Prize nominations. Featuring Orlando Weeks as lead vocalist, guitars played by brothers Felix and Hugo White, Rupert Jarvis playing bass and Sam Doyle drumming, the band's three studio albums to date represent the epitome of British indie rock. With a strong and growing fan base, the band's regular tours have brought them into direct contact with their supporters and allowed more people to hear their unique sound.

The release of their first single in 2005, entitled “X-Ray,” was picked up by XFM-Radio. They played it extensively enough that the Maccabees were booked to support Arctic Monkeys on their tour. Six months later, their next single “Latchmere” was played by Radio 1 and on MTV2, earning them still more attention. Debut album, Colour It In, came out in 2007 and garnered a string of positive critical reviews. Following this album, the band were invited to tour in America with Bloc Party, before returning to London in late 2007 to start their own full UK tour. Sell-out performances at London's Roundhouse venue confirmed their arrival on the music scene. One of their songs, “Toothpaste Kisses,” was even featured in a major advertising campaign by Samsung in 2007.

The follow-up to Colour It In was released in 2009, called Wall of Arms. Its producer was Markus Dravs, of Arcade Fire fame, and enormous popularity had arrived. Radio appearances and TV performances led to main-stage bookings for the Reading and Leeds Festivals and the headline position on the 2010 NME Awards Tour. The album itself went to number 13 in the UK Album Chart, while later that year the publication Artrocker named Wall of Arms the joint Number 1 Album of 2009, tied with It's Blitz! by the Yeah Yeah Yeahs. The Wall Of Arms tour took in venues around the UK, ending its run at Brixton Academy in a sold out performance. Supported by a full brass section, the band performed their entire album to rapturous applause. After a two-year break, the third album, Given to the Wild, was released in 2012.