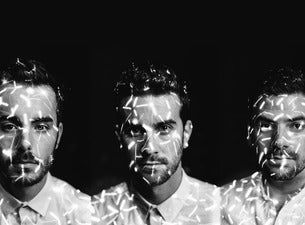 Soul pop group the Shadowboxers continue to blow audiences away with their rich, velvety three-part harmonies and soulful sound, and they've earned the seal of approval from none other than Justin Timberlake. The band is a dynamic act that's comfortable playing a wide range of genres, from pop and rock to blues and fun. At their enthusiasitc live performances the Shadowboxers deliver renditions of Sir Paul McCartney's "Maybe I'm Amazed" and originals like "Lovers In Rome" with energy to spare, and they continue to wow fans on their electrifying tours.

Hailing from Atlanta, Georgia, the Shadowboxers met in 2008 during their college years at Emory University. After jamming together the band settled on a soulful sound that combines three-part harmonies, funky guitar and bass riffs, and jazz-style. In 2010 they had an impromptu run-in with Emily Saliers from Indigo Girls, and she fell in love with the band's music. The encounter brought the band out on a two year tour with the Indigo Girls, an opportunity that gained them thousands of new fans around the world. In 2012 the band raised money for their debut album through a Kickstarter campaign that was fully-funded by their devoted fanbase. Thge result was their highly anticipated 2013 debut Red Room, which the band supported with numerous shows along the East Coast. A formidable live act, the Shadowboxers continue to treat ticket buyers to their incredible showmanship, upbeat music, and power-packed live performances on tour.