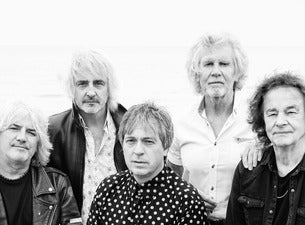 The Zombies on Tour

An iconic British band of the 1960s, The Zombies created some of the most adventurous and wondrous pop songs of their era. Hits such as "She's Not There" and "Time of the Season" continue to be rediscovered by new generations of listeners who are just as wowed by these songs' ingenuity and richness as the Zombies' first audiences were.

Since returning to world stages as The Zombies in 2004, cofounders Rod Argent (vocals, keyboards) and Colin Blunstone (vocals) have made the band vital in the present, too. With Argent and Blunstone backed by guitarist Tom Toomey, bassist Soren Koch and drummer Steve Rodford, The Zombies have garnered wide acclaim for their new recordings as well as 40th and 50th anniversary tours for Odessey and Oracle, the group's still-spellbinding 1967 masterpiece.

Inducted into the Rock and Roll Hall of Fame in 2019, The Zombies performed dates with fellow music legend Brian Wilson on the Something Great From '68 tour, which launched at the Hard Rock Hotel in Las Vegas in 2019.

The Zombies in Concert

The Zombies' six-decade saga began in 1962, when a group of music-crazed teens in the English town of St. Albans started their own band. After changing their name from The Mustangs and adding bassist and songwriter Chris White, The Zombies' potential became clear. Their first single for Decca in 1964, the plaintive "She's Not There," became a signature song of the British Invasion, reaching No. 2 in the U.S. and selling over one million copies.

In 1967, The Zombies set a new standard for pop with an album that would become as influential and revered as the very best of The Beatles. Odessey and Oracle fully demonstrated the gifts of White and pianist Rod Argent, who crafted beautifully ornate showcases for lead singer Colin Blunstone's voice alongside their own. "Time of the Season" became another major U.S. smash.

The original band split up by the time of the album's release, but White and Argent would soon have more success with their new band Argent. In the 2000s, Argent and Blunstone started a new chapter for The Zombies when they reunited for a series of tours, including a triumphant Odessey and Oracle 40th anniversary tour. New albums such as 2015's Still Got That Hunger are further proof of The Zombies' renewed vitality.