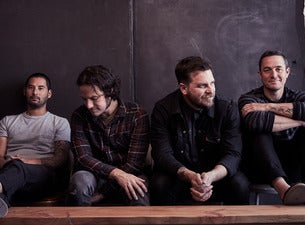 Thrice has been a staple in the alternative/modern-rock world for over fifteen years. A band known for effortlessly and continuously releasing groundbreaking records, their discography has sold over a million copies, and they've toured the world with acts like The Deftones, Coheed & Cambria, Rise Against, Circa Survive and Brand New.

Thrice released their first proper full-length, Identity Crisis, in 2001 and quickly stormed to the forefront of the indie music scene as listeners rejoiced and formed what can only be described as a cult following. The band went on to release seven highly praised albums – fan favorites The Illusion Of Safety (2002), The Artist In The Ambulance (2003) and Vheissu (2005), the brilliant and eclectic four-part concept album The Alchemy Index: Fire and Water (2007) and Earth and Air (2008), the visceral and raw masterpiece, Beggars (2009), and a grunge-inspired follow-up album, Major/Minor (2011). After a three-year break from writing and touring, the Orange County quartet are back in the studio recording their next full-length which is expected to be released in 2016 with tour dates in support.

They are touring on the Rockstar Energy Drink DISRUPT Festival in 2019. The touring festival features unique lineups in each city, including The Used, Thrice, Circa Survive, Sum 41, The Story So Far, Atreyu, Sleeping With Sirens, Andy Black, and more.