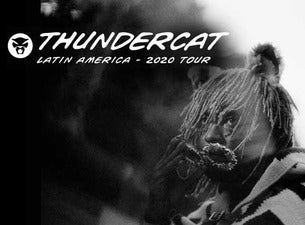 Genre-spanning bassist, singer, and producer Thundercat is known for keeping audiences on their toes with his head-spinning variety and eclecticism. From skittering fusion and squelching funk to synth-laden electro, one thing remains constant in his music -- his virtuosic bass playing. He's a true master of the instrument and it provides the backbone for his diverse sound, tying songs like "Oh Sheit It's X" and "Walkin'" together despite their markedly different vibes. In 2014 Thundercat provided tour support to his longtime collaborator Flying Lotus, and his stellar performances and futuristic stage wear on the road proved he's as impressive in concert as he is in the studio.

Los Angeles-born multi-talent Thundercat, a.k.a Stephen Bruner, fell in love with bass at an early age. In his teens he became the bassist of iconic LA thrash band Suicidal Tendencies, whose lineup also included his brother Ronald Jr. on drums. By the mid-'00s he was a sought-after session player, appearing on acclaimed albums by Erykah Badu and his Brainfeeder label mate Flying Lotus. Bruner made his solo debut as Thundercat in 2011 with the album The Golden Age of Apocalypse, a kaleidoscopic slice of bass-heavy fusion and electro that was a huge critical success. Following buzzworthy appearances at festivals like Coachella and Austin City Limits, he released his 2013 sophomore album Apocalypse to another round of critical praise.  A seasoned performer known for his mean bass playing and outré stagewear, Thundercat continues to get ticket buyers moving and shaking on his must-see tours.