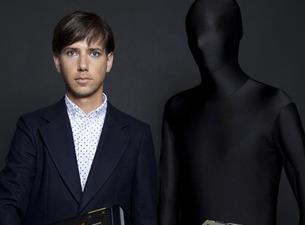 In the decade since Canadian electro icon Tiga released his pioneering 2006 debut album Sexor, he has become one of the most sought-after producers and remixers in electronic music. His legendary DJ sets contain only the most cutting-edge sounds and his performances are just as impressive, adding live vocals and state-of-the-art visuals to the mix. If you’re not shaking your booty by the time steamy electro jams like “Shoes” and “Hot in Herre” hit the speakers, you may want to check your pulse. Tiga concludes his epic album trilogy in 2016 with the release of No Fantasy Required, a synth-soaked dance romp that promises to draw him out for a string of highly coveted live shows.

Tiga James Sontag grew up splitting time between his birthplace of Montreal, Canada and Goa, India, where his hippie father regularly DJ’ed parties in the early days of Goa’s nascent trance scene. By age 17 Tiga was booking his own DJ gigs in Montreal, where he made a name for himself spinning at small raves and clubs like SONA. Underground popularity gave way to chart success in 2001 when he released a cover of Corey Hart’s “Sunglasses at Night” that topped the MTV Dance Chart and peaked at No. 2 in the UK. A string of buzzworthy remixes and a well-received DJ Kicks mix followed, and in 2006 Tiga released his debut album Sexor. Critics praised the record’s au courant electroclash sound, and in 2007 Sexor won a Juno Award for Dance Recording of the Year. His 2009 sophomore album Ciao! fared equally well, earning glowing reviews and spawning club favorites like “Shoes” and “Beep Beep Beep”. In 2016 Tiga thrilled fans with news of his third LP No Fantasy Required, the highly anticipated final chapter to the album trilogy that began back in 2006 with Sexor.