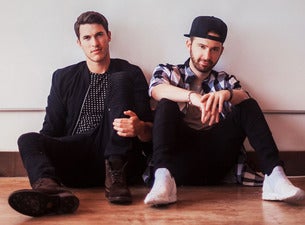 Since 2010, New York-based duo Timeflies has been igniting dance parties across the country with their self-described brand of “electro hip pop dub-something”. At their adrenaline-filled live shows, producer Rob “Rez” Resnick and vocalist Cal Shapiro masterfully navigate a wild array of genres, keeping the energy high and the good vibes flowing as they unleash an eclectic mix of rap, pop, and electronic music. The pair’s aptly titled third album Just For Fun (2015) was written on tour, and the explosive energy of life the road is unmistakable as they perform the record’s larger-than-life tracks in concert. Whether they’re hyping up their “Flyhard” fans with the euphoric EDM anthem “All the Way” or showing off their funkier side with the genre-defying retro romp “Worse Things Than Love” (feat. Natalie La Rose), Timeflies always treats ticket buyers to a party-worthy concert experience full of catchy-as-heck pop jams and swaggering showmanship.

Timeflies’ roots trace back to a 2007 party at Tufts University, where an impromptu jam session resulted in Shapiro freestyling over Resnick’s beatboxing. Recognizing a musical rapport, Resnick invited Shapiro to sing in his funk band Ride. After the project dissolved during their senior year the duo began recording songs as Timeflies and posting them to YouTube. Their 2011 debut album The Scotch Tape was a breakout success, peaking at No. 4 on Billboard’s Heatseekers charts and leading to performances at college campuses and music festivals around the country. Following several popular EPs the duo made their major label debut on Island Records with 2014’s After Hours LP, a Top 10 hit on the Billboard 200 that yielded the party favorite “All The Way”. Since then they’ve performed on Good Morning America and Jimmy Kimmel LIVE! and licensed their songs to high-profile clients like the MLB, Red Bull, and American Idol. With their third album Just For Fun generating major buzz in 2015, Timeflies are poised for their biggest year yet as they gear up for the highly anticipated Just For Fun Tour.