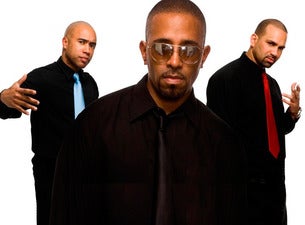 Latin freestylers TKA have been practicing the art of seduction since breaking onto the scene in the late-‘80s with their hit debut Scars of Love. Often performing in classic tuxedos, the trio sings their dance-infused hits like “One Way Love” and “Don’t Be Afraid” beneath bright lights and elaborate stage design during their live shows. Whether they’re getting the crowd pumped up or dancing in unison on stage, TKA’s electrifying live performances will have audiences on their feet all night long.

TKA got their start singing at a sweet sixteen party in Harlem, where they attracted the attention of producer Joey Gardner who signed the act to his label Tommy Boy Records in 1984. The trio released their smash hit single “One Way Love” shortly after, launching to stardom within the Latin community. The Spanish-language number “Maria” and pop-heavy track “I Won’t Give Up On You” continued to earn the group widespread acclaim and were featured on their 1992 Greatest Hits album, a record that showcased their ability to blend an array of genres and cultures into their music. Although parting ways for a number of years, TKA reunited with a fresh lineup and new material for the 2001 release Forever, which spawned a collection of Top 40 dance tracks and paved the way for their continued touring. Back on the road, the kings of freestyle will take the stage with legends like Vanilla Ice and George Lamond, to name a few, treating fans to their hit-filled sets along the way.