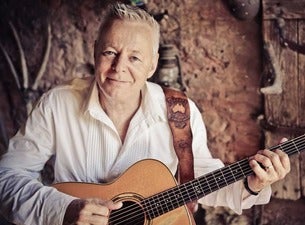 A skilled guitarist, singer and songwriter, Tommy Emmanuel takes his craft to new heights with his unique fingerstyle technique and percussive approach. He excited fans with the 2017 album, "Live at the Ryman," and collaborative release, "Pickin' with David Grisman." The guitarist performed at several locations in support of these extraordinary albums during the 2017 Music Gone Public Tour. He plans to appear in Houston, Sacramento, Fresno, Boston, Chicago, Indianapolis, Atlanta, Nashville, and several other cities. He also impressed fans during the 2014 Fingerstyle Milestones Tour, the 2012 Certified Gems Tour and the 2008 Emmanuel Labor Tour. Every Tommy Emmanuel Live experience places emphasis squarely on his technical prowess. He leaves audiences in awe with his percussive and inventive style. Despite being a guitar virtuoso, he remains surprisingly modest and affable, prompting an easygoing vibe even in large, jam-packed venues. Hit greatest hits include "Stevie's Blues" and "Guitar Boogie." His song "Gameshow Rag" won the Grammy Award for the Best Country Instrumental Performance. He was later appointed a member of the Order of Australia.

Born in New South Wales, Tommy Emmanuel received his first guitar at the age of four and launched his professional career just two years later. His brothers also possessed natural musical talent, so his father formed a small family band and took it on the road. His greatest inspiration during these early years came from the radio, where he heard Chet Atkins playing. After years of touring Australia in station wagons, the New South Wales Department of Education insisted that Emmanuel and his brothers begin attending school. His professional career came to a brief halt, but picked up again after he moved to Sydney as a teen. Following a series of victories at local talent contests, he made a name for himself as the lead guitarist in Doug Parkinson's backing group. He also toured with the rock group Dragon before embarking on his solo career. His breakthrough arrived when John Farnham invited him to play in the Concert for Rwanda. He enjoyed a second breakthrough performing live at the Summer Olympics in Sydney. Today, Tommy Emmanuel boasts a strong international following, with fans representing a variety of cultures and age groups. His fans appreciate his regular updates on YouTube, where he posts solo performances and collaborations. He also has an impressive fan following on Instagram.