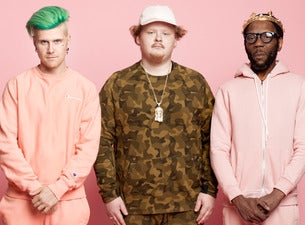 Boletos para Too Many Zooz

Acerca de Too Many Zooz

Too Many Zooz in Concert

There aren't many performers who playing near public transportation and to playing on TV, but this group happens to hold that honor. Leo Pellegrino on baritone sax, Matt "Doe" Muirhead on trumpet, and David "King of Sludge" Parks on drums... together, they're Too Many Zooz.

Their music has been heard everywhere from New York subway busking performances to television commercials and music award shows. Their music, which finds huge, dance-worthy riffs in its saxophone and trumpet interplay, must be heard to be believed.

Pellegrino and Muirhead met at Manhattan School of Music, where they played together in Drumadics, a local busking group. The duo soon turned into a trio with the addition of Parks, at which point the "brass house" group — called so, ostensibly, because of the weirdly exotic house music vibes these live musicians achieve — started performing in NYC subway stations.

A video of them performing at Union Square Station went viral in 2014, catapulting them to international fame. The following year, the group went on tour throughout the U.S., eventually playing backup for Beyoncé and the Dixie Chicks at the 2016 CMA awards in Nashville, Tennessee.

In 2014, Too Many Zooz released their first EP, and have since released multiple albums, including their 2016 full-length debut Subway Gawdz. To say their first LP was a winner would be an understatement — single "Warriors" was featured in a commercial for Google's Pixel 2 in October of 2017, while "BRNX BMBR" was featured in a KFC commercial. "Get Busy" was used in Netflix's film The Package. Around this time, the band was featured in DJ Kaskade's single "Jorts FTW." In 2018, the band released a Christmas EP titled ‘A Very Too Many Zooz Xmas.'