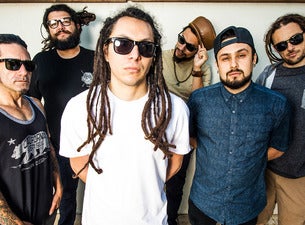 SoCal reggae rockers Tribal Seeds have shared the stage with some of the genre's biggest names on their journey from local heroes to nationally acclaimed headline act. Taking the stage with a surplus of good vibes, the band never fails to leave fans feeling irie at their live shows, putting songs like "Love Psalm" into practice with feel-good performances that span their catalog. With fifth album Representing all set to drop, the band will treat fans to another round of vibed-out shows on the Representing Spring Tour 2014.

Brothers Steven Jacobo and Tony-Ray Jacobo formed Tribal Seeds in the mid-'00s, making their self-titled album debut in 2008 to a spot on iTunes Best Reggae Albums list. 2009 follow-up The Harvest was a similar success, making its way to No. 5 on the Billboard Reggae Albums chart and setting the stage for extensive touring. The band's spiritual lyrics and positive message were a hit on the road, leading to appearances alongside giants of the genre including the Wailers, Stephen Marley, and Rebelution. In 2011, their EP Soundwaves peaked at No. 2 on the Billboard Reggae Charts, paving the way for the band's continued touring and a highly anticipated fifth album due out in 2014.

"Tribal Seeds puts on a great show, esp. with 'Vampire' and 'Run The Show' at the end. Awesome from start to finish--these guys are real music, unique sound and great songwriting. Total pros in performance."

"Tribal Seeds killed it! Amazing live show! Will def attend again if they come back to our area! It was AWESOME!"

"Tribal Seeds was incredible. They did a great job, as always. They were fun, interacted with the crowd, and overall really nice guys."