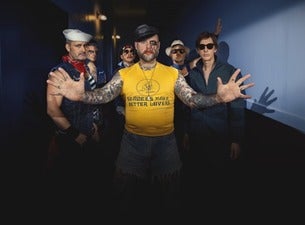 Legendary Norwegian punk outfit Turbonegro has been one of the genre's most idiosyncratic and fascinating groups for nearly three decades. The band mashes up glam, hard rock, and straight-up punk to arrive at what they call "deathpunk", and their unique sound ñ along with their wildly theatrical live shows ñ have earned them a huge cult following. In concert they deliver an all-out spectacle, taking the stage in an outrÈ combination of nautical gear, fetish wear, and tight denim and peppering their sets with hilariously lewd humor and bawdy antics. As the band kicks out high-octane anthems like "The Age of Pamparius" and "City of Satan", frontman Tony Sylvester delivers his bitingly sarcastic lyrics with a commanding authority that's only heightened by the naval regalia on stage. It's a wild experience that draws legions of fans out every time the band performsóand Turbonegro never disappoints.

Turbonegro formed in Oslo in 1989 and honed a unique deathpunk sound with early albums like Hot Cars and Spent Contraceptives (1992), Helta Skelta (1993), and Never Is Forever (1994). They spent their early years performing in black face paint and wigs, a controversial move that underscored the disdain for political correctness expressed in their lyrics, but by 1995 they had adopted a denim and mustache look that played on gay erotica tropes. Their 1996 album Ass Cobra was an underground hit, and in 1998 they cracked the Top 20 in Norway with their fifth album Apocalypse Dudes. Despite the success the band called it quits later that year, but reformed in 2003 and released Scandinavian Leatheróthis time topping the charts in their home country. Since then they've continued to enjoy commercial success while also cultivating a growing international fanbase thanks to their legendary live shows.