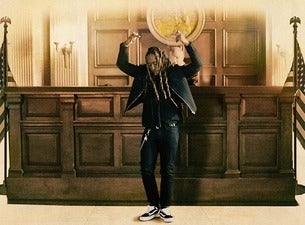 Hip hop up-and-comer and Wiz Khalifa protege Ty Dolla $ign always impresses with his skillful blend of rapping and singing. Ty has proven himself a dynamic young talent both on his own recordings and on tracks by B.o.B and Juicy J, and his lyrical versatility takes center stage at his can't-miss live performances. Whether he's spitting favorites like "Paranoid" or tossing wads of cash out into the crowd, Ty Dolla $ign always treats ticket buyers to an energetic show full of swagger and bounce-worthy beats.

Ty Dolla $ign, a.k.a. Tyrone Griffin, was born in Los Angeles in 1985 to a musical family -- his father played in Lakeside, the funk outfit behind the 1980 No. 1 hit "Fantastic Voyage". After learning several instruments in childhood he turned to writing and producing hip hop, and in 2010 he had his first taste of success as writer and producer of YG's breakout hit "Toot It and Boot It". His 2012 mixtape Beach House earned him a wider audience with critically acclaimed tracks like "Know Y I Came" and "My Cabana", which Complex named one of the "Best 50 Songs of 2012." Ty dropped an EP also titled Beach House in 2014 to another round of critical praise, cracking the Top 10 of the Top R&B/Hip-Hop Albums chart with hit singles like "Paranoid" and "Or Nah".  With his debut album Free generating buzz in 2014, Ty Dolla $ign has fans eagerly awaiting his upcoming tour dates.