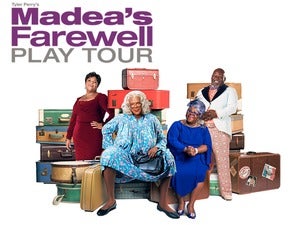 Say goodbye to America's most malevolent mother. After 10 plays and as many films, Tyler Perry is retiring Madea, his most memorable — and profitable — creation. Introduced in Perry's 1999 play I Can Do Bad All By Myself, Madea will meet her end in 2019 during the Madea Farewell Play Tour and latest movie, A Madea Family Funeral.

Before Perry put on his Madea wig, makeup, and fat suit, he was a high school dropout in New Orleans inspired to write by an Oprah Winfrey episode. His 1998 play I Know I Been Changed and its successors became wildly popular on the urban theater circuit. They financed Perry's first film, Diary of a Mad Black Woman, which he wrote, produced, and starred in. The 2005 release marked the cinematic debut of the intimidating and felonious "Madea" Mabel Simmons, her hapless brother Joe, and his son Brian — all played by Perry.

Madea — her name is the Southern pronunciation of "mother dearest" — is based on Perry's own mother and aunt combined with Eddie Murphy's over-the-top performance in Nutty Professor II: The Klumps. The 10 Madea films have grossed more than $500 million at the box office. Perry memorialized Madea's words of wisdom in a 2006 book, Don't Make a Black Woman Take Off Her Earrings: Madea's Uninhibited Commentaries on Love and Life. (Sample advice: "Too many people want to be friends with their children.")

Not all of Perry's films have been comedies. He adapted Ntozake Shange's acclaimed 1975 theater work as the 2010 film For Colored Girls. In addition to nearly four dozen movies and plays, he has also developed several TV series, including Tyler Perry's House of Payne, The Haves and the Have-Nots, and Love Thy Neighbor. As an actor, Perry plays Admiral Barnett in Star Trek and former Secretary of State Colin Powell in Vice.

While Madea — a character Oprah Winfrey has described as "a compilation of all those strong black women that I know and maybe you do too" — has been the cornerstone of Perry's rewarding career, he doesn't sound completely sorry about seeing her go. As he told radio host Bevy Smith, "I just don't want to be her age, playing her."