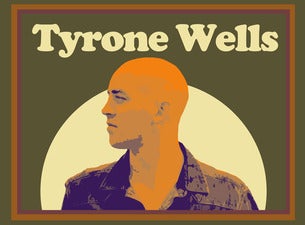 Folk pop crooner Tyrone Wells has made a name for himself with his heart-rending voice, tender lyrics, and passionate live performances. A video of Wells singing "Beautiful Girl, Beautiful World" to his newborn daughter went viral in 2014, and the same sense of wonder that comes over baby Aria in the video can be experienced at his exhilarating live shows. In concert Wells keeps it simple, serenading fans with little more than an acoustic guitar and his warm, evocative voice. From the deeply moving "Time of Our Lives" to the life-affirming "Happy as the Sun", Wells' spiritually satisfying tunes and sincere live performances always leave fans feeling uplifted.

Tyrone Wells was born to a musical family in Spokane, WA, but he didn't begin writing songs until he moved to Southern California to attend Hope International University. He began performing in the mid-'90s as the singer of Sinai (later renamed Skypark), a Christian band that received a Dove Award nomination in 1998 for their album Am I Pretty? In 2000 Wells launched his solo career with a series of acoustic shows in Orange County, and in 2001 he released his self-titled debut album. A string of well-received records followed, but it was 2009's Remain LP that really put him on the map when it peaked at No. 17 on Billboard's Heatseekers Albums chart. He followed up in 2010 with the EP Metal & Wood, an auspicious collection of songs that spent several weeks at No. 1 on the iTunes Singer/Songwriter Chart. His 2012 album This Love fared similarly, reaching No. 2 on the iTunes chart and cracking the Top 20 of the Heatseekers chart. With his highly anticipated album Roll With It generating buzz in 2015, Wells has fans eager to experience his intimate acoustic sets in the flesh.