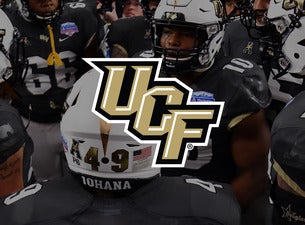 Located just northeast of downtown Orlando, Spectrum Stadium has been the Knights' home since 2007, when it took over from what was then called the Citrus Bowl. It quickly earned the nicknames "The Bounce House" and "The Trampoline," thanks to vibrations produced in the stadium whenever fans jumped in unison. While officials said the structure was sound, UCF moved quickly to take the bounce out of the stadium, spending $400,000 to add steel to the beams and girders.

UCF isn't old enough to have any hoary old traditions, but that doesn't mean there's no pageantry to the proceedings. Come out a couple hours before kickoff and greet the players during their Knight Walk from IOA Plaza. Ninety minutes before kickoff, you can join the marching band and the spirit team near Knights Plaza for the fan march to the stadium. And when "Zombie Nation" comes on the speakers at the game, be sure to bounce.

Varsity football didn't come to UCF until 1979, when the Knights joined the NCAA's Division III. In 1996, UCF ascended to the NCAA's top division, becoming the first to play at all levels of college football. In short order, the Black and Gold became an unlikely national contender. In 2004, under new coach George O'Leary, UCF went 0-11. Over his next 10 seasons in Orlando, the team went to seven bowl games. These included a 52-42 Fiesta Bowl victory over Baylor, capping a 2013 season in which the Knights went 12-1 and undefeated in conference play.

In 2017, under coach Scott Frost, the Knights swept the regular season, won their conference championship game over Memphis in double overtime, and beat No. 7 Auburn in the Peach Bowl, 34-27 — the first undefeated season in school history. Locked out of the College Football Playoff, athletic director Danny White simply proclaimed UCF the national champion. The program went so far as to hang a national championship banner and hold a victory parade. This caused a good bit of controversy within college football, which had hoped its playoff system would resolve such disputes. The following year, the Knights proved they weren't flukes, going 12-1, their only loss coming against LSU in the Fiesta Bowl. That game ended UCF's 25-game winning streak.