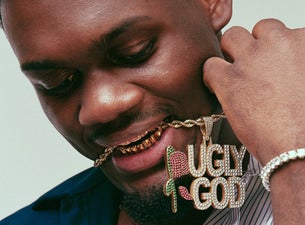 It's important to never take yourself too seriously, a lesson the rapper known as Ugly God knows all too well (if you couldn't tell by his name). Who else could pull off a diss track to himself, with hilariously self-deprecating lyrics like, "Four years ago, you got jumped on Halloween"? But when the Houston native performs his purposely goofy, mischievous hits like "Water," "I Beat My Meat," and the aforementioned "F*ck Ugly God" live, mosh pits ensue, and he'll occasionally jump into the crowd to share in the revelry, as he did at the 2017 XXL Freshman Class live show in Los Angeles. Since his 2016 breakthrough, the rowdy rapper has rocked stages across the country, from Billboard's 2017 Hot 100 Festival to the 2018 Rolling Loud Festival in Miami, where he served as a playful, happy-go-lucky foil to the downcast grit of his SoundCloud rap peers.

Ugly God's become known as the unpredictable class clown of a new rap generation; a trip through his video catalog and social media accounts reveals a strange affinity for lizards, an obsession with Pokemon, and an all-around bonkers sense of humor. Born Royce Rodriguez, the rapper and producer calls Houston home after spending his early life in Indiana and Ohio, where he briefly considered a career in computer engineering before finding his calling as a hip-hop goofball and social media star. He recorded his breakthrough hit, "Water," on a whim in his freshman dorm room, and the song almost immediately went viral, racking up over 100 million plays on SoundCloud. Now 22, Ugly God's made a lane for himself in the mold of the oddball mysticism of Lil B, the savvy proto-meme rap of Soulja Boy, and the playful whimsy of iLoveMakonnen and Lil Yachty. In other words, he's got a knack for earworm hooks, harnesses the chaos of the internet to his advantage, and would rather make you laugh than wow you with lyrical miracles. And it's paid off; in 2017, Ugly God released his first full-length project, The Booty Tape, and was awarded a spot in the XXL Freshman Class roster.