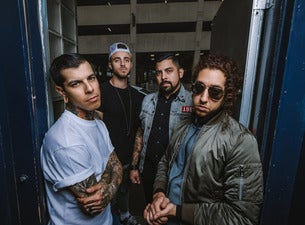 Boletos para Upon a Burning Body

Acerca de Upon a Burning Body

UPON A BURNING BODY IN CONCERT:

For nearly a decade, Texas-based metal outfit Upon a Burning Body has been shaking audiences to the core with their brutal sound, aggressive lyrics, and blistering live performances. Frontman Danny Leal is a commanding presence at the band's live shows, radiating savage intensity on hard-hitting tracks like "Scars" and "Sin City" while the band keeps pace with bludgeoning guitar, heavy bass, and pummeling drums. Whether they're performing cuts off 2014's The World Is My Enemy Now or having a little fun with their cover of Lil Jon's "Turn Down for What", Upon a Burning Body always treats fans to an adrenaline-filled and cathartic concert experience that will leave them thoroughly rocked.

Upon a Burning Body formed in San Antonio, TX in 2005 and released the Genocide EP that same year. They spent the next few years amassing a loyal following with extensive regional touring, and in 2010 they released their full-length debut album The World Is Ours. The record peaked at No. 28 on Billboard's Heatseekers chart, introducing the band to a national audience and drawing them out on a coast to coast tour. They followed up in 2012 with their sophomore album Red. White. Green., a critically acclaimed release that topped the Heatseekers chart and landed at No. 11 on the Hard Rock chart. The band's rise continued in 2014 when their third album The World Is My Enemy Now cracked the Top 40 of the Billboard 200 -- a huge feat for a deathcore metal band. An electrifying live act known for their aggressive shows, Upon a Burning Body continues to blow minds on their must-see tours.