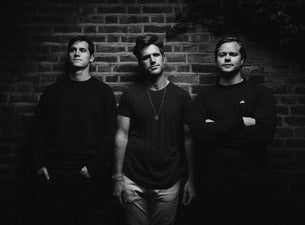 True to their name, New York City synth-pop trio VHS Collection provide the sort of hazy 1980s flashback you get from a dusty, blurry video cassette of an MTV broadcast.

After transitioning into a live act and becoming regulars at legendary Lower East Side venue the Mercury Lounge, VHS Collection released their 2015 debut EP, which featured their calling-card single "Lean." An exuberant electro anthem in the vein of classic New Order and post-millennial successors like M83, the track would reach the Top 10 on Spotify's Viral chart, a feat repeated by the 2016 single "Waiting on the Summer," a delectable dose of slinky, spidery indie-pop that went on to rack up more than 20 million Spotify streams.

That viral success would turn VHS Collection into fixtures on the festival circuit, with the group's expanded five-piece lineup making appearances at Lollapalooza, Austin City Limits, and Governor's Ball, among others. In 2017, the group embarked on its first national headlining tour, selling out club shows from coast to coast.

The group's wiry onstage energy can be felt throughout their 2018 full-length debut, the aptly titled ‘Retrofuturism.' Recorded with renowned producers Chris Zane (Passion Pit, Mumford & Sons) and Tony Hoffer (Belle and Sebastian, Beck), the album sees VHS Collection updating their synth-pop circuitry with smooth disco struts ("Take My Money"), psychedelic soul ("The Otherside"), and U2-scaled alt-rock ("Break"). But for all their festival-conquering success, Spotify hits, and epic ambitions, VHS Collection have remained a proudly DIY, self-managed entity, reinvesting all their revenues into the band's operations to ensure they keep hitting the next level on their own terms.