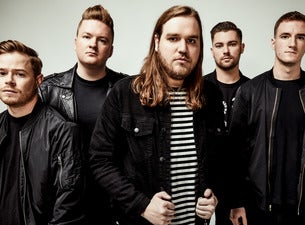 Wage War are the kind of hard rock band that isn't easily categorized. That starts with their influences: Although the band's chugging riffs and jackhammering drums take cues from modern music's heaviest names (including Slipknot, August Burns Red, and As I Lay Dying), the group are also known for pairing contrasting inspirations. Their brutal grooves often fuse hip-hop and metal in the way Korn is known for doing, and frontman Briton Bond's gruff, gravelly voice alternates with the more pristine melodic approach of guitarist/vocalist Cody Quistad.

Bond, Quistad, and guitarist/vocalist Seth Blake originally formed Wage War in Ocala, Florida, in 2010 under the moniker Empires. The trio, which was then working with a different rhythm section, even released an EP in 2011, The Fall of Kings.

After some lineup shuffling, the band changed their name in 2013 and, two years later, signed a deal with Fearless Records. Wage War's 2015 full-length debut for the label, Blueprints, and the 2017 album Deadweight were both co-produced by Andrew Wade and A Day to Remember's Jeremy McKinnon.

Deadweight especially illustrates their progression as a band, as it boasts more confident, emotional songwriting and variety in dynamics. In fact, Wage War continue that soul-searching on the 2019 single "Low" — a bruising song about feeling worn down by life — and via the 2018 singles "Johnny Cash (Stripped)" and "Gravity (Stripped)." The latter two are pared-down versions of songs that originally appeared on Deadweight, and they boast chiming guitars, restrained percussion, and delicate vocals.

Given this energy, the band are unsurprisingly road warriors who have done several stints on the Vans Warped Tour and opened for Of Mice & Men, August Burns Red, and A Day to Remember. Wage War are now ranked among the genre's biggest heavyweights, with spots in the lineup of the Sonic Temple Art + Music Festival and Welcome to Rockville 2019.