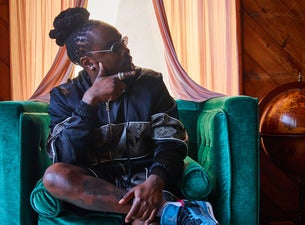 With a voice that is rough, passionate, sly and ready to take on anyone daring question the Nations Capitol's place in the hip-hop firmament, Wale has been a force in pop and R&B since 2006 when his "Dig Dug (Shake It)" became a ubiquitous hit in his hometown. Born in Washington, DC of Nigerian descent, Olubowale Victor Akintimehin, better known as Wale (pronounced Wah-LAY, as he likes reminding you), has matured sonically, lyrically, and in overall reach since those days, thanks in large part to extensive touring that brought him to his African roots. His third studio offering, 2013's ÒThe Gifted,Ó debuted at No. 1 on the Billboard Top 200 and demonstrated that Wale not only possesses an ear for slick production and pop hooks, but also a heck of a Rolodex. The album's all-star roster of guest stars includes Cee Lo Green, Nicki Minaj, Rihanna, Wiz Khalifa and Jerry Seinfeld, to whom Wale famously paid tribute in 2008's "Mixtape About Nothing." (No doubt the comedian has a return ticket for the expected follow-up, Album About Nothing.) Whether he's in studio or giving high-energy concert performances (which are a throw back to D.C.'s seminal go-go scene), Wale has a style and approach that simply refuses categorization-- not to mention a wit and irreverence that prove that all those nights watching Seinfeld have not gone to waste.