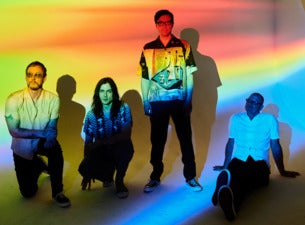 Weezer, formed in Los Angeles in the early, alternative-era '90s, became a premier guitar-rock/pop band with the release of their self-titled debut in 1994. A number of fun, catchy songs from the album—"Undone (The Sweater Song)," "Say It Ain't So," "Buddy Holly"—became huge successes among alternative rock listeners, receiving substantial radio play and appearing as highly inventive and entertaining videos on MTV. In 1996, after releasing Pinkerton, an album which revealed an even more accomplished songwriting ability from the band, Weezer remained silent for a few years before reestablishing themselves as an important rock band in the new millennium with 2001's Weezer (Green Album). Other releases include 2002's Maladroit and Make Believe in 2005.

Green Day, Fall Out Boy and Weezer, three of the biggest acts in rock music, are hitting the road together for the first time ever on THE HELLA MEGA TOUR presented by Harley-Davidson.

The global tour kicks off June 13, 2020 in Paris and will visit cities across Europe and the UK throughout the month including Glasgow, London, and Dublin. Produced by Live Nation, the 20-city North American outing will bring the bands to some of the most renowned stadiums including Dodger Stadium, Wrigley Field, Citi Field, Fenway Park, and more. Beginning July 17 in Seattle, WA, the outing makes stops in Houston, Miami, Toronto, New York and more, before wrapping August 29 in Philadelphia, PA. More dates will be announced. The Interrupters will appear as special guest on the tour.