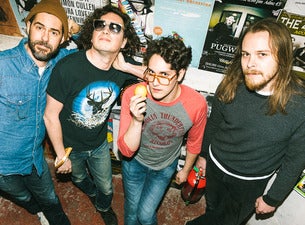 With a rigorous tour schedule that’s selling tickets across the US, Australia and the UK, Texan rockers White Denim are bringing their unique sound to audiences around the world. A live concert really is the best way to see them, because they’re a jam band that knows how to play to a crowd, with heavy guitar-based garage rock mixed with jazzy prog-rock interludes that show off their considerable guitar skill. They can bring it in for rootsy acoustic ballads or open things up for heavy blues rock show-stoppers. They've drawn comparisons to a wide variety of bands, including The Grateful Dead, Blue Oyster Cult, Thin Lizzy, The Black Keys, and especially Wilco. In 2012, White Denim toured with Wilco, whose frontman, Jeff Tweedy, produced White Denim's latest album, 2013’s Corsicana Lemonade, which has been met with rave reviews. As heard on lead single “Pretty Green,” the album is the closest yet to capturing the virtuosity and joyous energy of White Denim’s live performance.

It's a sound the band's been working to achieve ever since they came together back in 2005. Following a series of self-released EPs and while working as a power trio, the band released their first single, the jangly "Let's Talk About It,” in 2007. Since then, they've added a fourth member and released five albums, featuring singles like "All You Really Have To Do," "I Start To Run" and “Drug.” Never content and never entirely satisfied, each new release has seen the band further experimenting and refining their trippy sound. Corsicana Lemonade is the band at the their best yet, but with 2014 bringing more shows, there’s certainly still more to come.