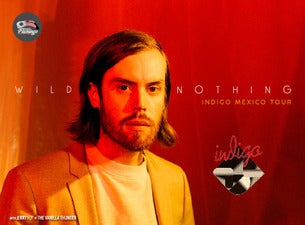 WILD NOTHING IN CONCERT:

Brooklyn-based musician Jack Tatum has become a critical darling with his project Wild Nothing, which marries the romantic synths and shimmering guitars of indie pop with the prodigious musical chops and seductive rhythmic pull of Philly soul. Over the course of three acclaimed albums, Wild Nothing’s sound has gone from lo-fi to high-gloss, but Tatum’s brilliant melodic sense has remained a reliable sonic calling card that makes any Wild Nothing song instantly recognizable to fans. Tatum writes and records alone, but in concert he’s joined by a talented backing band that helps bring soaring songs like “Reichpop” and “Shadow” to life with top-notch musicianship and undeniable chemistry. This is celebratory indie pop at its finest, and Tatum and company set a buoyant mood from the moment they take the stage, lacing every track with lush synths, chiming guitars, and danceable drumming. Whether they’re playing cuts off of 2016’s Life of Pause or breaking out their fantastic cover of Kate Bush’s “Cloudbusting”, Wild Nothing always takes ticket buyers to epic heights with their nostalgic sound and passionate performances.

Jack Tatum began recording under the name Wild Nothing in Blacksburg, Virginia in 2009. That same year he released a sparkling, synth-soaked cover of Kate Bush’s song “Cloudbusting” that generated major online buzz and earned him a deal with venerable indie imprint Captured Tracks. After putting together a touring band and playing some early shows, Tatum released his 2010 debut album Gemini, a critical success that landed on numerous year-end lists including Pitchfork’s Top Albums of 2010. His 2012 sophomore album Nocturne was an even bigger hit, topping Billboard’s Heatseekers Albums chart and earning heaps of critical praise. Over the next several years Wild Nothing toured extensively, captivating fans at festivals around the world with their dreamy sound and heartfelt performances. In 2016 Tatum released Wild Nothing’s third album Life of Pause, an ambitious, triumphant collection that has fans looking forward to the band’s next round on the road.