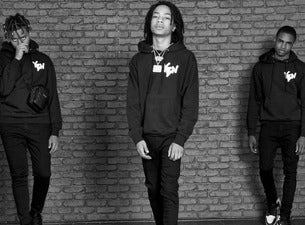 What with all this young MC has accomplished at 18, age most definitely is nothing but a number for YBN Nahmir. Whether he's trading rhymes with his fellow members of the YBN hip-hop collective or racking up millions of hits with his solo tracks, YBN Nahmir's steely yet inventive flow makes it easy to understand why so many major labels fought over the burgeoning trap superstar before he signed a deal with Atlantic in 2017.

His rapid rise began when he got an Xbox 360 for Christmas at the beginning of his teenage years. Though he considered himself a gamer first and foremost, he was soon drawing attention for the freestyle raps he'd drop during Xbox Live parties and Grand Theft Auto V streams. He says these excursions into hip-hop were "just a hobby" until he took it to another level with "Rubbin' Off the Paint," the track that became his breakout smash. An ingenious combination of game-inspired sounds, Nahmir's precocious yet menacing boasts, and references to his cartoon faves SpongeBob Squarepants and ‘Rick & Morty,' it swiftly took off after the video was released on WorldStarHipHop's YouTube channel in September 2017. One of many low-tech clips he shot with his friends just for fun after class, the video ultimately racked up over 130 million views and helped send the song up to No. 46 on Billboard's Hot 100. A follow-up that further demonstrated Nahmir's love of Bay Area rappers like E-40 and West Coast icons like Tupac, "Bounce Out With That" topped the 100-million mark on YouTube.

YBN Nahmir stayed hot in 2018 with guest spots on G-Eazy's "1942" and Wifisfuneral's "Juveniles." He also joined his friends YBN Cordae and YBN Almighty Jay for ‘YBN: The Mixtape,' the first full-length display of the group's talent alongside the likes of Gucci Mane and Machine Gun Kelly. The trio's current tour stokes anticipation for Nahmir's Atlantic debut, which he's getting to drop in 2019. That he somehow found time to finish high school makes his achievements to date all the more impressive.