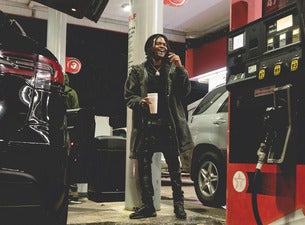 Among the rising new wave of Atlanta emcees who keep pushing Dirty South rap to the fore is Young Nudy, a spirited and mischievous emcee who fiercely spits intoxicating rhymes about life in the gritty streets of the ATL. The 25-year-old artist — who hasn't revealed his government name — was kicked out of high school at age 14 and began immersing himself in East Atlanta's hardcore hip-hop lifestyle.

Though he was reluctant to assume a rapping role himself, old heads of the scene noticed Young Nudy's linguistic potential, and by 19 he was pushed to hop on the rap route. Then his cousin, 21 Savage, convinced the budding wordsmith to feature in 2015's "Air It Out" clip, a wicked aggro-trap number whose video displays a mob of thugs with guns blazing.

Because of Young Nudy's previous run-ins with the law, "music sh*t kept clashing, and it backfired," he told The Fader, thus getting him incarcerated several times. He didn't want to spend more time inside a cell, so once he got out, he started hanging in the studio.

There, he met Pi'erre Bourne, a then relatively unknown trap beatmaker behind some of Playboi Carti and 6ix9ine's hits. The South Carolina producer dug Nudy's tempered and unhurried flow and snuck him into the recording studio off the clock to begin working on the 2016 debut of his ‘Slimeball' series. They've followed up with a mixtape every year since. 2017's confessional ‘Nudy Land' LP saw the emcee exploring the tropes of Atlanta trap. For his latest, 2018 ‘SB3,' Nudy enlisted other producers in the mix.

"I come from the streets where this sh*t ain't sweet," slyly flows Young Nudy against a menacing trap beat off of "Sweep," the intro track to his ‘Slimeball' debut mixtape. With an unhurried, unapologetic demeanor, that's how the Atlanta rapper introduced himself as he arrived to the stage of Rolling Loud SoCal in 2017.

In 2018, the young emcee appeared at Trees in Dallas, and two days later made a stop at the Warehouse Live Studio in Houston. He performed hits off his ‘Slimeball' mixtape series and other features.