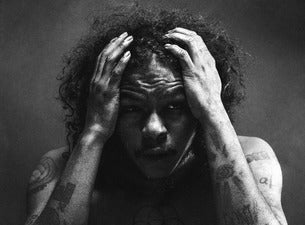 SoCal rapper and longtime Kendrick Lamar collaborator Ab-Soul is captivating fans of leftfield hip hop with his unique flow, heavy beats, and haunting samples.  His mesmerizing sound plays out perfectly at his live shows, where he treats fans to cerebral cuts like "Pineal Gland" and "Closure" with a lyrical precision that lets his witty wordplay really shine. An energetic performer with big talent to match his outsized swag, Ab-Soul never fails to impress with his showmanship and lyrical acrobatics on tour.

Hailing from Carson, CA, Ab-Soul, a.k.a. Herbert Anthony Stevens IV, was exposed to music from an early age in his family's record store. He wrote his first rap verse at age 12 and continued to hone his skills in online chat rooms dedicated to keystyling -- the text-based equivalent of freestyle rapping. He began performing in the mid-'00s, and in 2007 he signed to Top Dawg Entertainment, an indie label that included budding rappers Jay Rock and Kendrick Lamar on its roster. After releasing two popular mixtapes, Ab-Soul made his album debut in 2011 with Longterm Mentality, a moderate success that landed at No. 73 on the Top R&B/Hip-Hop Albums chart. His 2012 sophomore album Control System was a bigger success, receiving praise from critics and peaking at No. 9 on the Top Rap Albums chart. His rise continued in 2014 with his third album These Days..., which featured appearances from Schoolboy Q and Rick Ross and landed at No. 2 on both the R&B and rap charts. A first-rate wordsmith with razor-sharp delivery skills, Ab-Soul continues to floor fans on tour.