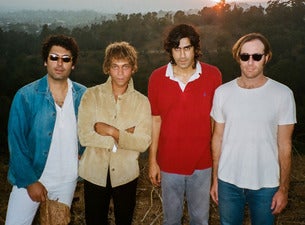 Allah-Las could be straight out of the surf rock era of the '60s with their dreamy guitars and chilled-out vocals. Whether they're enjoying a cold one on stage or rotating between different instruments, Allah-Las know how to get fans pumped up during their live shows. A hot new act who's making major strides in the indie rock scene, the four-piece treats fans to high-energy performances full of instrumental breakdowns, incredible musicianship, and timeless surf tunes.

When members of Allah-Las met in 2008 during their days working at the famed Los Angeles record store Amoeba Music, they knew they had a strong musical connection and decided to form a band. Drawing comparisons to '60s English rockers the Kinks and the Zombies, the outfit incorporates instrumental jam sessions and otherworldly guitar riffs into their unique sound, simultaneously paying homage to surf music from the '60s. With the release of several singles including 2011's "Catamaran/Long Journey" and 2012's "Tell Me (What's On Your Mind)/Sacred Sands" came widespread attention from critics, who praised the band for their throwback sound. Allah-Las debuted their self-titled LP in late 2012, winning over thousands of fans with tours throughout Europe, the UK, and the eastern United States. Known for their blissful live performances, Allah-Las wow ticket buyers at home and abroad every time they take the stage.