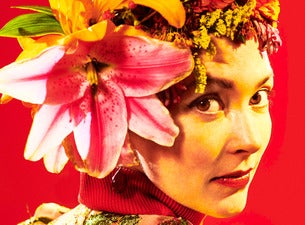 Alt-country sweetheart Amanda Shires has made a name for herself with her velvety croon, impressive violin playing, and simple yet powerful arrangements. Critics have likened Shires' voice to greats like Emmylou Harris and Dolly Parton, and fans lucky enough to catch her powerful renditions of emotional tracks like "Devastate" and "Swimmer" in concert will have no trouble seeing why. A talented multi-instrumentalist as comfortable on the ukulele as she is on the violin, Shires always enthralls ticket buyers with her musicianship and dynamic energy on tour.

Texas-born Amanda Shires began performing with Western swing outfit the Texas Playboys at age 15. In the early '00s she began writing her own music, and in 2005 she released her solo debut album Being Brave. After relocating to Nashville she followed up in 2009 with her sophomore album West Cross Timbers, a powerful collection of songs that garnered praise for its masterful songwriting and uncluttered arrangements. Critical acclaim continued with her 2011 album Carrying Lightning, which contained the track "When You Need a Train It Never Comes" -- named the fifth best song of the year by American Songwriter magazine. With her fourth album -- 2013's Down Fell the Doves -- Shires achieved her most ambitious collection of songs to date, earning another round of glowing reviews before hitting the road on tour.