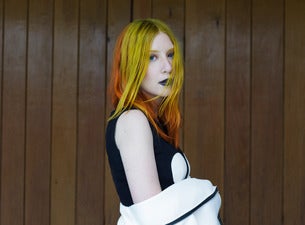 Canadian synthpop trio Austra have made quite a name for themselves with their dreamy electronic compositions and electrifying live shows. The spellbinding vocals of frontwoman Katie Stelmanis are more compelling than ever at the band's live shows, where kaleidoscopic, synth-drenched tracks like "Lose It" and "Home" take on new dimension with the addition of a live drummer. Whether the band is performing their unique cover of Robyn's "None of Dem" or playing cuts from 2013's Olympia, their shimmering sound and passionate vocals always make for a mesmerizing concert experience.

Austra got their start in 2009 under the name Private Life, performing shows throughout the Toronto area. After discovering that another band was using that moniker they changed their name to Austra, which is the middle name of the group's frontwoman Katie Stelmanis. Their 2011 debut album Feel It Break was a critical and commercial success, landing at No. 22 on the US Heatseekers Albums chart and earning them a Juno Award for Electronic Album of the Year. After extensive touring in support of the release Austra returned to the studio for their 2013 sophomore album Olympia, another critical success and a longlist nominee for the 2014 Polaris Music Prize. Following the release of the Habitat EP in 2014, Austra has fans around the world eagerly awaiting their future tour dates.

"...there are not enough or descriptive enough words to even convey the sheer genius that is Austra....first of all, the lead vocalist had me spellbound the entire performance!...I'm still recovering from the intensity of the performance."

"...this band has grown from being an opening act to the main event--but never anything less than an amazement, an ever-evolving ensemble that is as exciting to see as they are to hear."

"NEVER disappointed with Austra performance. Each member gives it their all and Katie, you’re absolutely breathtaking."